10,000 guest-beds,1,08 million guest-nights per year,164 units of catering and entertainment and 264 shops plus one international airport are all waiting for guests at Héviz who can from the 28th of this July also reach the West-Balaton region by using CSA flights from Praag.
First time this year, soon a new direct flight between Prague and Héviz-Lake Balaton will be started which-according to plans-will be flying passengers until the middle of November. But those whom are concerned place trust in that this cooperation will continue next year,too,even all around the year.
For the community of Lake Balaton the July to August period has always counted as a high-season, as this is the easiest time to fill up accommodations. In turn, this is just the time when an other high-season starts up at the near by town of Héviz - was explained by Mr Gergely Horváth, the deputy managing director of tourism at the Hungarian Tourism Plc. about the mid-summer start of charter-flights. Where as the actual length of chain of flights will be depended on the demands of Tour-Organizers. Nevertheless,as for the present,so far there are a good 16 flight-connections seem to be taken off.
The Service itself would be useful for both Parties, as passengers from  West-Transdanubia through Prague can reach numerous further destinations. While, looking into the matter as from a respect of Entry, the above collaboration would
draw nearer not only Czech tourists but also could be bringing closer the Russian Market, which is taking up one quarter of  CSA's capacity.
The negotiations about the Prague-Héviz-Lake Balaton charter had begun at the Budapest Conference yet back in 2013, which resulted in an immediate increase of passengers from the Czech Republic in the near past and we believe this new air-connection will further strengthen this rising up tendency. Where, at the same time we can also count on the joining of forces and workmenship of Service givers, in the interest of  marketing activity of the region.- said Mr Gergely Horvath. 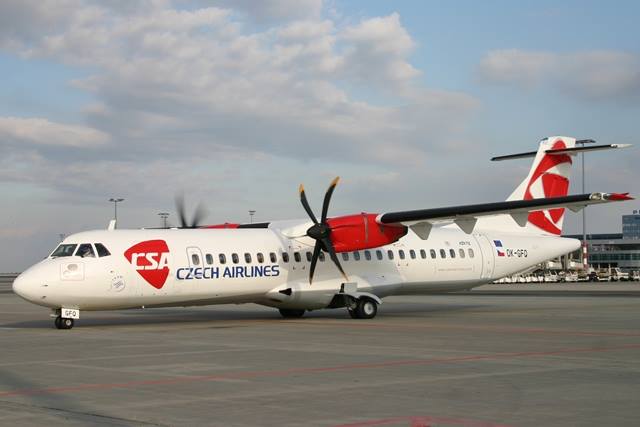 DEVELOPING AIRPORT
The 46,5 % of Héviz' turnover comes from tourists. By Mr Gábor Papp, the Mayor of Héviz  It was a good decision that the formerly privately owned Héviz-Balaton Airport in 2012 was taken over  by a company belongs to the local Council, as in the first year alone the number of arriving passengers had increased to a 18,000, during 2013 it was 28,000 already, while quite recently their numbers are said to be reached a 35,000 figure this year-according to estimations.
Besides the regular  German charter flights - flying from the Airports of Hamburg, Frankfurt,Dusseldorf,Erfurt and Leipzigzig - the number of the western sending areas have further grown with Friedrichshafen and the Swiss Basel Airports.
Parallel with the German widening the Moscow capacity has also increased with the putting into service of a new charter.
The new arrival of guest from Bohemia comes as a  sort of rejuvenation to the circle of guests at Héviz. Who are primarily drawn by the local spa and wellness services based on curing thermal water of the Lake of the town, while the rests of them come here for the sake of the various vivid and colorful programs and summer festivals.
According to the freshest effect-analysis, these days an average overseas tourist who flies here by an airplane usually spends about 15 nights and pays about 21,000Ft/a night for it. Whereas those ones who drive here by a car,they nor-
mally spend only 6.3 nights at Héviz on average, for which they pay about 11,000Ft per a night. So, even from this small comparison above one can easily see the possibilities lying in the increase of number of air-passengers.
PRAGUE AND BEYOND
The CSA (the Czech National Airlines) which was established in 1923 and it is the fourth oldest Air-Company in the World. It has flown to Budapest since 1938 and presently there are three daily charters and an other two flying on the weekends between the two Capitals. Passengers with Héviz destinations should use flight ATR 72, and those who are interested in a return ticket from Héviz back to Prague, they can get it at a very cheap price,as it only costs 30,900Ft including the Air-port taxes. The charter takes off from Prague at 11.55 A.M. and lands at the Héviz-Balaton
Airport at 1.20 P.M.,departs back for Prague at 3 P.M. and arrives at the Václav Havel Airport at 4.30 P.M.
While the new Héviz-Prague charter itself has further connections from the Václav Havel Airport as passengers from there can fly to numerous Eastern and Western Europian destinations using Czech Airlines flights. The Prague-Héviz charter - among the others - has good connections to flights coming in from Moscow, Jekaterynburg,
Perm, Rostov-na-Donu and Samara.
Furthermore,the charter also provides a fast and comfortable connecting possibility to the Western-Europian Airnetwork, especially to Berlin, Hamburg, Düsseldorf, Frankfurt, Strassbourg, Brussel, Amsterdam, Koppenhaag, Warsaw, Bukarest, Paris, Milano and Tel Aviv.
The CSA fleet presently consists of 24 Airplanes which this summer along with their share-code partners fly to the 125 towns of 50 countries and they have 8 charters that connecting Prague to Soul every week.
In spite of its relatively small dimensions, the Prague Airport has very good and fast connections with a 30 minute transfer-time within the schengen zone and a 40 minute transfer-time outside of it.