The Emirates Airlines coming to Budapest

From this autumn on there is a Budapest-Dubai charter taken – off every day, which can deliver more than 3,800 passengers a week.
It was just a short time ago reported in Dubai that Emirates Airline will start a daily charter flight between Budapest and Dubai. The new air connection is starting up on the 27th of October and makes several cities of Asia, the Near East and Australia, what is more even Rio De Janeiro and Buenos Aires available with just very short changing times. From day one, the charter will be consisted of the fleet of high capacity and widen fuselaged Airbus A330 airliners runned by the Arab Air Company, marked with the familiar logo of the latest 2014 Brazilian FIFA World Cup. 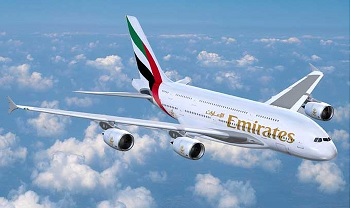 The Emirates airbuses have two classes with a 278 seat capacity and they are able to carry 3,892 paasengers weekly between Budapest and Dubai. Since the bankruptcy of Malév this is first big distance charter which would straightaway start its operation with using huge airoplanes – although it would not be able to begin with anything else, as there are no any aircraft with narrow fuselage and one corridor within the Emirates fleet. The launch of the flight was preceded by an announcement from the aircompany – said it would open its global services headquarters at Budapest, providing jobs for more than 300 people there. Otherwise, there are already approximately 140 Hungarians work for the air company at the present, out of which 114 work as a steward/stewardess and 8 of them even as a pilot – including Krisztian Bartfai, the bronz –medal Olympic kenue champion.
„We have been working hard with them during the past 5 years, so as to Budapest also can be taken up into our rapidly growingtraffic network, and such I am absolutely positive about itt hat the new charter  would be very popular – said Mr Jost Lammers, the Above Chief Excutive of Budapest Airport. The above mentioned charter will mean as an extra 12 ton goods carrying capacity  in all directions, which is a great opportunity for Hungarian agrocultural companies to make their high quality  but perishable food stuff to Dubai.
The new Dubai charter will be a competition to WizzAir, which flies to Dubai World Central Airport. There is going to be an even bigger race with the 5 star quality Quatar Airways , which has flown to Doha for a long time with daily regularity, from where passengers from Budapest can travel on towards similar destinations. And it will also be in a high competition with Turkish Airlines, which has lots of similar changing possibilities on other, what is more it does all this besides an excellent timetable, as thay have 3 airliners from Budapest daily flying to their changing central in Istambul.
As for the competitionand the airports, at Dubai Airport the terminal which is used by the Emirates is offering a great scale of conveniences’s services’ services. Even for those who are travelling  at the economy  class, in a similar fashion with Quatar Airways, who had its brand new changing central, Hamad International opened in this May.
The Emirates is the fourth biggest air company in  the world, and its basis airport is the Dubai International Airport, which can be found in the capital  of the United Arab Emirates. This leading airline company of the Near East is running a massive fleet of 224 airliners, which exclusively consists of wide fuselaged air vehicles of Boeing777s, Airbus A330, Airbus 340s and Airbus 380s and it flies to 143 different destinations all over the world. It operates the biggest fleet of Airbus 380 Superjumbos. On a boards such upto date services like a seat-to-seat sms sending facility, a wide selection of movie films and TV shows and even WIFI spots on certain charters. Additional, their allowed baggage weight allowance is 30 kilos at the economy class and it is 40 kilos for the business class.